We are excited to announce that with the release of GT-SUITE V7.5, Build 2, realtime GT-POWER engine models are running twice as fast than in previous versions.  Specifically for GT-POWER engine models, recent developments by the engine modeling team at GT have resulted in a tremendous speedup of the core realtime solver, with large reduction in both mean turnaround time as well as peak turnaround time (turnaround time, also known as “TET”, is model execution time per ECU sampling interval).  This new development allows for most four, six, and even eight cylinder engines (SI and DI, naturally aspirated and turbo) to be run on common HiL systems without overruns and with higher levels of model detail than previous versions.  Internal testing on a battery of 10 real world testcases show an average TET of approximately 0.4xRT, with maximum TET around 0.5xRT, using high frequency sampling common in today’s ECUs.  The release also comes with a brand new Model Analyzer that scans the model and provides useful recommendations in order to prepare the model for HiL execution.  Iakovos Papadimitriou, leader of controls and HiL modeling at GT, commented “we are very excited to introduce this new development to our large base of GT controls and HiL users, and look forward to working with them and new customers to deploy this new solver on their HiL systems.” 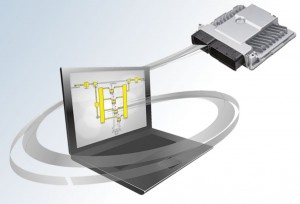 GT runs on all leading HiL systems including those from dSpace, ETAS, NI, and others.  If you are a current GT-SUITE Realtime customer, or just interested in giving GT-RT a try, please contact us at support@gtisoft.com to receive these new realtime packages.  We look forward to hearing from you and welcome your feedback on these new developments.